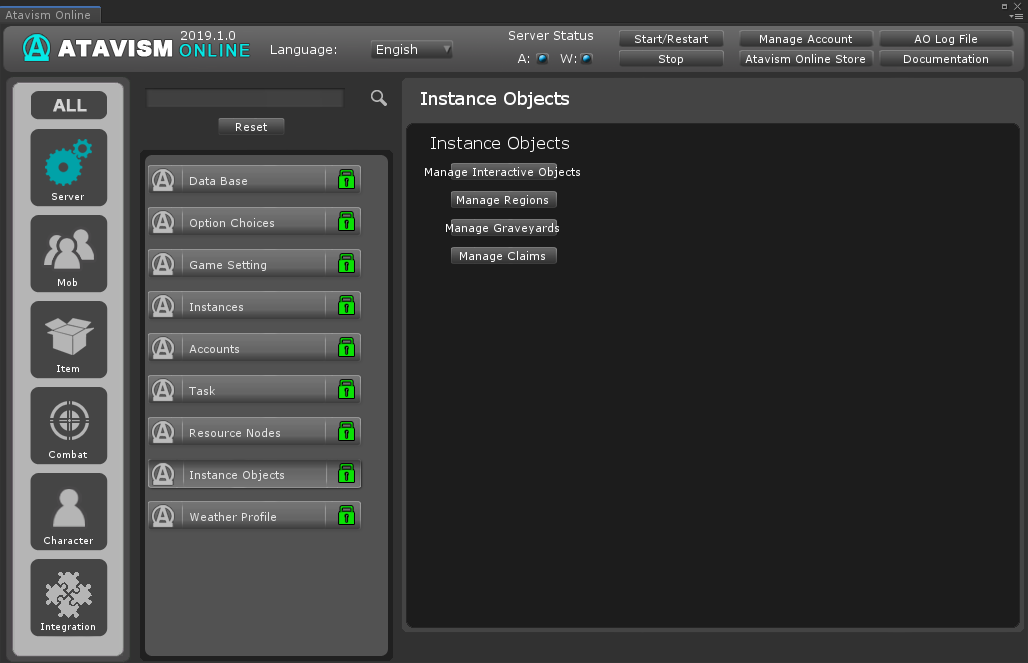 In this plugin you can manage your scene objects (save or delete and set grid size for them) like:

Interactive Objects are set up in the Unity Editor then saved to the Content Database with the Atavism Editor.

You can set the properties as follows:

You can add as many Interactive Objects as you want to your scene.

Saving Resources to the database

Restart your server and go forth interacting those Interactive Objects.

Regions are set up in the Unity Editor then saved to the Content Database with the Atavism Editor.

Regions are GameObjects with colliders that exist in a Unity Scene. Place your Game Object in the scene and add an Atavism Region component. The important thing is to not scale objects but collider only like cube directly on Box Collider Component. Also Collider Component has to have Is Trigger checkbox ticked.

You can set the properties as follows:

You can add as many Regions as you want to your scene.

Saving Regions to the database

When you have your Regions added to your scene, open the Atavism Editor and go to the Instance Objects Plugin. Click on Manage Regions then Save Regions and wait for the “Nodes Saved” message. Now save your scene again as the Regions would have been given an id by the database.

Restart your server and go forth interacting those Regions.

Graveyards are set up in the Unity Editor then saved to the Content Database with the Atavism Editor.

Graveyards are GameObjects with colliders that exist in a Unity Scene. Place your Game Object in the scene and add an Atavism Graveyard component.

You can set the Faction requirement for each Graveyard point, so each Faction which is defined in Factions Plugin can have its own Graveyard Spawn Points.

You can add as many Graveyard Points as you want to your scene.

Saving Graveyards to the database

When you have your Graveyards added to your scene, open the Atavism Editor and go to the Instance Objects Plugin. Click on Manage Graveyards then Save Graveyards and wait for the “Nodes Saved” message. Now save your scene again as the Graveyards would have been given an id by the database.

Graveyards work like spawn points, so if the player will die, then he can release, and then he will be released in the nearest graveyard spawn point location with matched faction requirement.

In order to use that functionality instead of static default spawn point system, you have to have set parameter USE_PLAYER_SET_RESPAWN_LOCATIONS to false in Game Setting Plugin.

Also, the player can use spirit form option instead of release on death, in this case, you can choose effect which will be applied in spirit form by setting parameter SPIRIT_EFFECT to the id of the Effect. The parameter can be defined in the Game Setting Plugin while Effect can be defined in Effects Plugin. While the player is in spirit form he can be revived by Revive Effect which can be applied to him by another player, Region or Interactive Object.

Claims are areas of the world that players ‘lay claim to’ allowing them to build in the area. Players may buy and sell claims and place objects freely within their claim and any other claims they have been given permission to build in.

Players can view the claims in the world by opening up the World Builder UI from the rightmost button in the toolbar menu located at the top right of the screen. When they enter a claim they will be shown a UI that gives them options based on their permissions for that claim.

Claims can be added to the world in two ways. 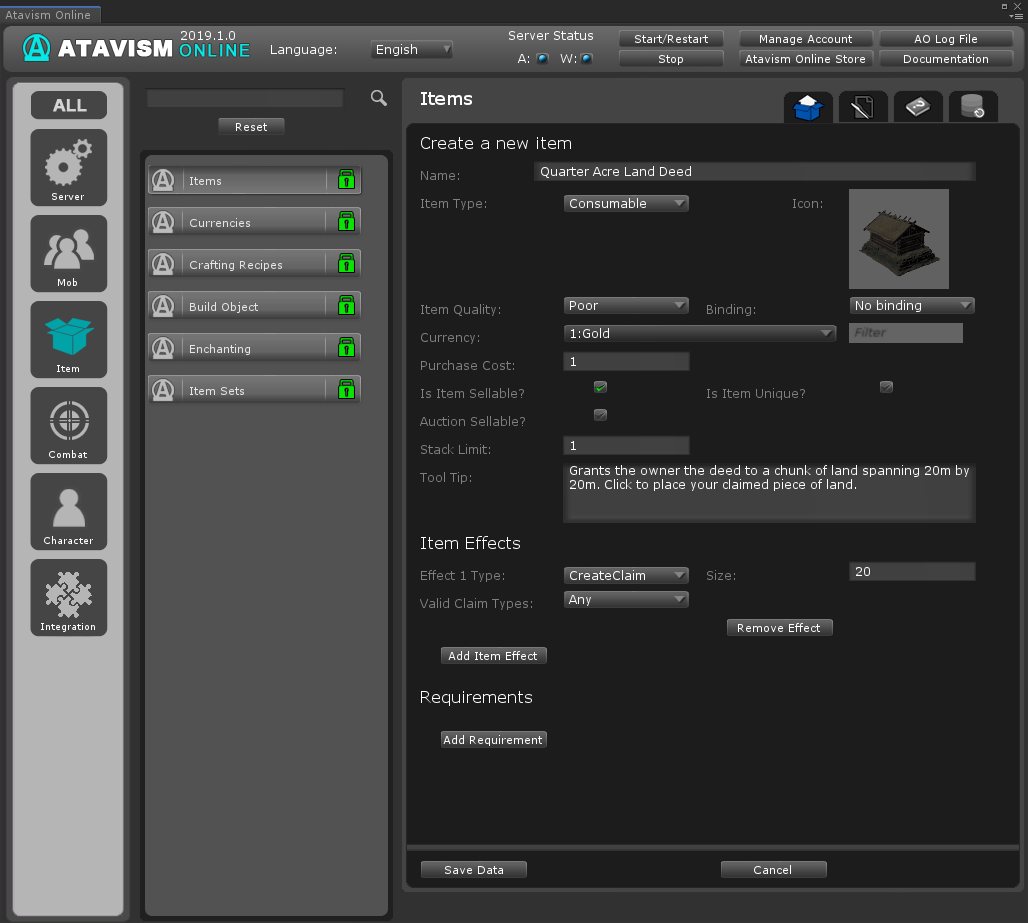 When a player clicks on a Create Claim item it will spawn the Claim where they are standing unless they are too close to an existing Claim. The item will only be removed if the Claim is successfully created.

Players can place down building objects in their claims or other claims they have permission to build in. Objects can be a single place down object such as a chair, or they can be structural building items such as a wall that players can build up over time with resources.

The objects in the claim can be interacted with and keep their state saved to the server, such as a door that can be opened and closed. Other players can also attack objects that have been built up, ruining the appearance of someone’s beautiful creation.

To facilitate the setup of the Build Objects a Plugin has been added to the Atavism Editor.

Setting up a Build Object

Before a user can have an object to place in the world a prefab needs to be created in Unity. The Prefab will need the ClaimObject component added to it along with a collider either on the object or one of its children so it can detect mouse over and clicks.

The settings on the Claim Object component do not need to be set but can be set to customize behavior.

The Cursor Icon setting allows you to set what the cursor should look like while the player’s mouse is over the object. The selected color is what color the object should turn when it is selected so the player knows which object is selected. The Coord Effects are the different coordinated effects the object can play when clicked.

Once the prefab has been made, go into the Build Object Plugin in the Atavism Editor and create a new template. Set the name and other requirements as needed, then drag the prefab into the Stage 1 Prefab slot along with setting the Items needed to be able to build this object. 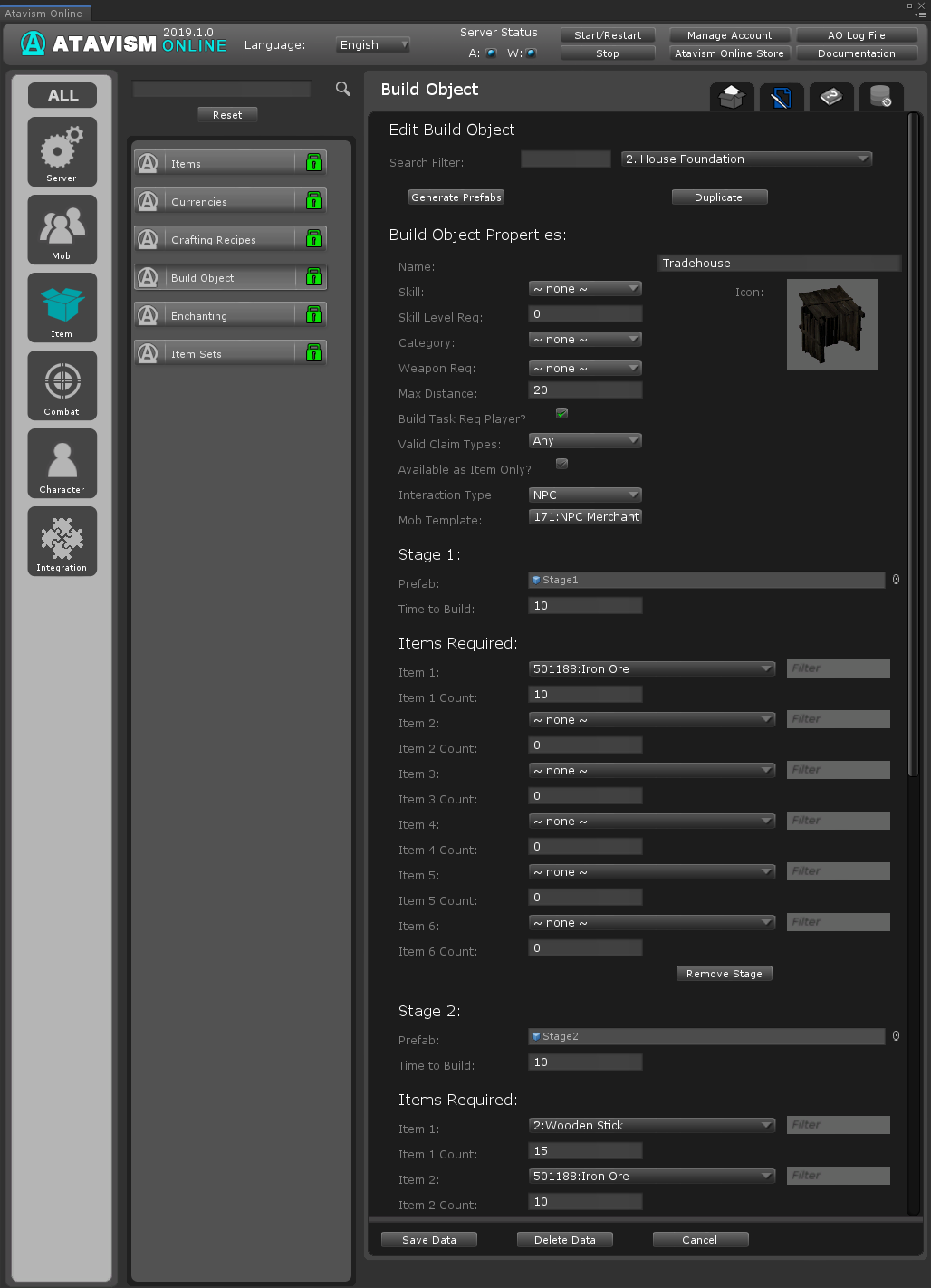 If you want additional stages to your build object (allowing players to build up their object) then click the Add stage and set the new prefab for each stage.

Save the data when done.

Note that the server will need to be restarted before the template will be available to build.

Placing Build Objects in the Claim

From the build menu

Any Build Object Template not marked as “Available as Item Only” will be in the build menu for players when they are in the claim. From the claim menu click on the “Create Object” button and then click on the object you want to place. The player needs to have the required item for stage 1 as defined in the template.

From an Inventory Item

A Claim Object can be linked to an Inventory Item by adding a ClaimObject effect to an item. 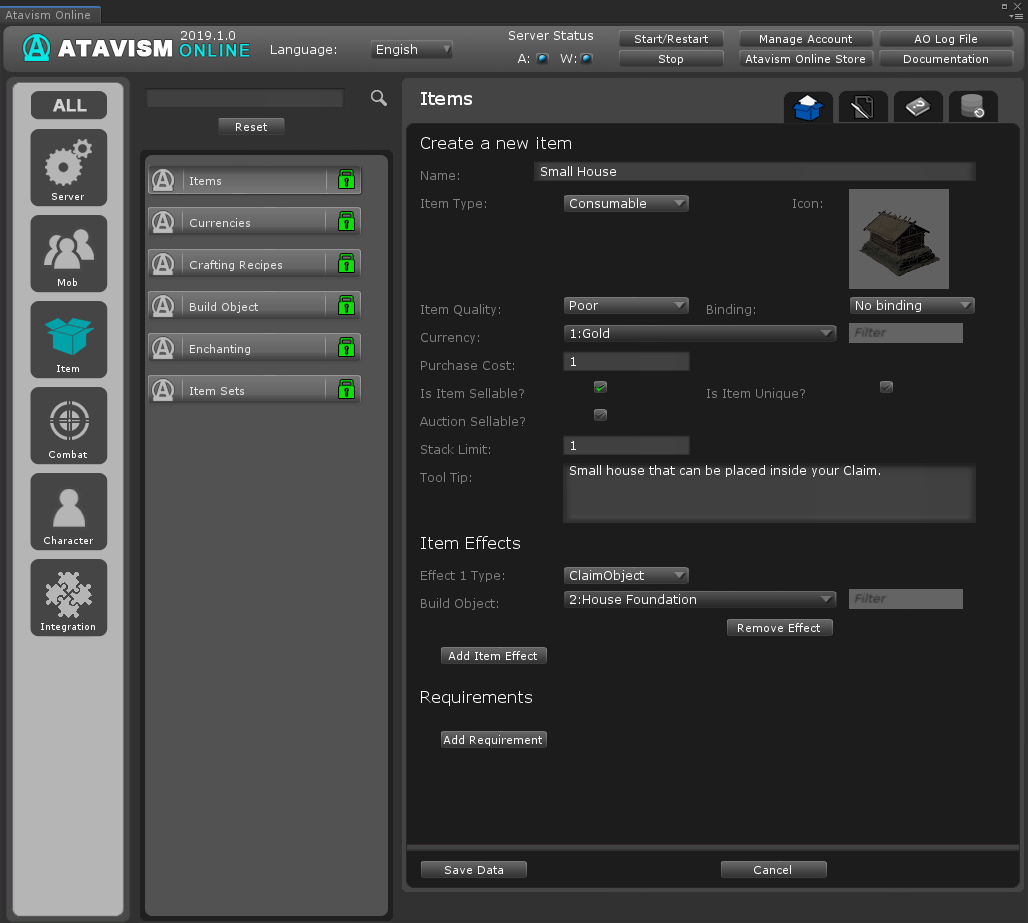 Players can place that item in their Claim by opening up the World Builder UI and clicking on the “Place Item” button. They then click on the item in their Bag and it will display the model by their cursor allowing them to choose where to place it.

It is recommended that Claim Objects as Items do not require other materials or have a build time as it may confuse users, but the option is yours to set it how you like.